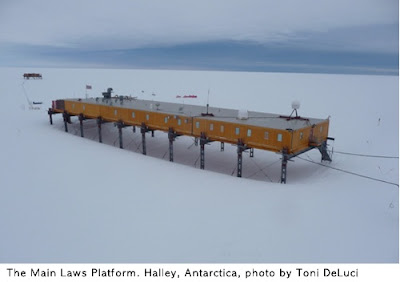 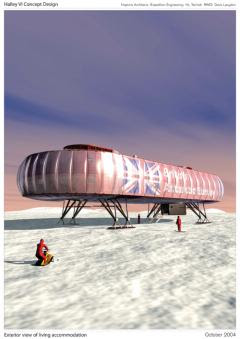 These are pictures of the Halley Research Station in Antarctica. It is located on the Brunt Ice Shelf on the Wendell Sea. It was founded in 1956. Since that time, the building has had to be remade five times, due to being buried by extreme snow accumulations. A new building (2nd picture) that is believe to be more durable than the old (first picture) is currently being made. As you can see, the new building is set on a large set of skis, so that it can be temporarily relocated if need be. The new building was made in South Africa and is expected to be fully set up on site by December. The temperatures range between -55 degrees in the winter to -10 on a sunny summer day. During the winter, only 16 scientists work here, but during the summer employment reaches about 70. The Aurora Australis can be seen 105 days of the year. It was here that the ozone hole was discovered in 1985.
Posted by gmscharoun at 12:15 PM