I Said Brrrrrrrr, It's Cold in Here

As we've learned in class, and extremophile is an organism that lives and thrives under extreme conditions. In fact, for some of these organisms, and extreme environment is crucial to their existence. These environments include highly acidic ones (acidophiles), highly basic ones (alkaliphiles), ones high in sugar content (osmophiles), extremely hot ones (thermophiles) and extremely cold ones (psychrophiles)

This is a picture of a psychrophile, the ice worm. Ice worms were first discovered in 1887 on Muir Glacier in Alaska. They are blind and less than an inch long. Here, they feed off of the red algae one the glaciers. They bury themselves about 5 feel beneath the ice. They live in colonies of up to 20 million. These worms have since also been found on the floor of the Gulf of Mexico in 1997. The worms were found 1,800 feet under the sea by Charles Fisher. Here, they bury into mounds of methane which seeps up through the ocean floor. Scientists think that the worms eat chemosynthetic bacteria from the methane. The temperatures are at about 32 degrees Fahrenheit. At 5 degrees Fahrenheit they cannot thrive.


Here is an ice worm close up: 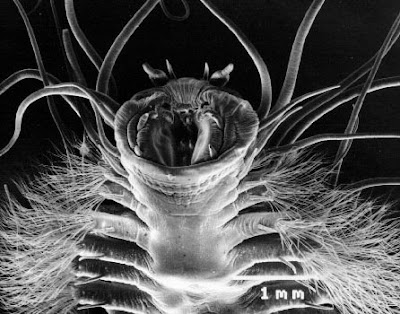 And here is a colony of the creatures: 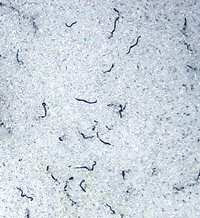 Here is a link to a video that shows a habitat where the ice worms might live, as well as some live footage of the worms.

Posted by gmscharoun at 1:37 PM